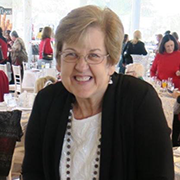 In 2015, Sherrie founded Sisters United Alliance with Diane Mosier.  Together they developed the voting project to activate non-voting likely Democratic women.  In Harris County in 2016 SUA turned out 37,000 women.  In 2018 Sherrie had to take the reins after Diane passed away unexpectedly.  In 2018 SUA turned out 44,000 women.  She continues to lead the SUA effort in 2020.

Sherrie has a grass roots commitment to the Democratic Party in Texas reaching across five decades.  Her experience includes running for a Texas House District, serving as chair of a Texas Senate District and most recently as Chair of Harris County Democratic Clubs and Organizations in 2016 and 2018.

Sherrie has a career as an elementary school teacher, serving for six years on the board of the Texas State Teachers Association Political Action Committee and five years on the Clear Creek ISD Board of Trustees. Since retirement, Sherrie has been an educational consultant transforming low performing schools in several school districts including Houston ISD, Spring Branch ISD, and El Paso ISD.

Sherrie is a native Texan who grew up in Austin. She graduated from University of Houston with a BS in Education.  After graduation, she and her husband Mike moved to Houston. Sherrie and Mike have two daughters who live and work in the Houston metro area.